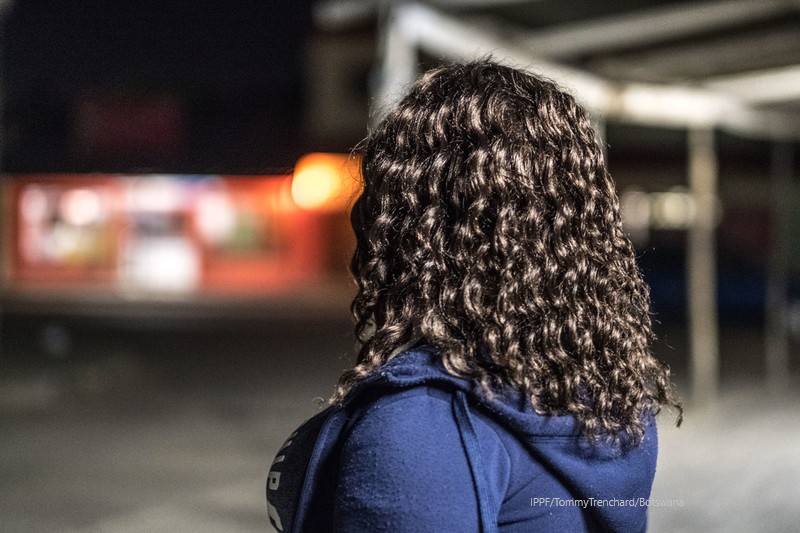 Accessing Quality Health Services as a Sex Worker was Very Difficult, Until I Went to LPPA's Thakaneng

31-year-old Kekeletso Lisebo* is a peer educator with Lesotho Planned Parenthood Association (LPPA). LPPA is IPPFAR’s Member Association in Lesotho. Kekeletso has been involved in the organization’s activities since 2011 when she participated in the Morning Star Project.

The Morning Star project, implemented by LPPA, sought to empower sex workers with the information and skills necessary to help them make informed decisions about their sex work and their reproductive health. It also aimed to address the challenges that this key population faces in accessing quality healthcare. Through the project, sex workers were able to access information and services offered by LPPA, and which were specifically tailored to their needs.

Kekeletso, a mother of two children aged 10 years and 2 years, talks to us about her experiences as a sex worker, her participation in LPPA's projects, and her role as a volunteer peer educator with LPPA.

“My first interaction with LPPA was when they came to one of the sex hotspots in Lesotho’s capital city of Maseru -where I was based. During the outreach, LPPA health workers talked to us about the importance of practicing safe sex during our work. Some of the issues they covered included: family planning, the need for correct and consistent condom use, prevention of unwanted pregnancies, HIV and other Sexually Transmitted Infections (STI), the importance of adherence to HIV/AIDS medication and the need for regular pap smears to help prevent cervical cancer, among others.

I was very interested in the information they shared because, as a mother (I had one child then), it was very important for me to be of good health in order to provide for my family. After the discussions, they invited us to enroll in the Morning Star project, which I did without hesitation.

Shunned in Health Centers Because of Sex Work

Before I joined the project, it was difficult to access health services. My fellow sex workers and I would often be looked down upon whenever we sought services at health centers.

Many are the times we would be pushed to the back of the queue as other clients were served first, even though we had arrived earlier. Because they knew we were sex workers, with many of us seeking treatment for Sexually Transmitted Infections (STIs), the nurses would use harsh and undignified words on us, accusing us of smelling bad and being ‘ungodly’. This constant ridicule hurt us deeply; discouraging us from seeking services. We would only go when our ailments were unbearable; as a last and inevitable resort.

That is why we were excited to learn that LPPA, through the Morning Star project was willing to offer us services that were sensitive to our needs. But the good news did not end there. They told us that we would access the services we needed at no cost!

When my friends and I went to the LPPA clinic in Thakaneng, we were so impressed! The facility was clean and spacious. The nurses treated us just like any other regular client and for the first time, we did not feel as though we were being judged based on our work or the ailments we presented with. This made us feel at ease and we opened up about our health needs.

One other aspect we liked about the LPPA Thakaneng clinic was that we would access multiple services that were provided by one nurse –in one consultation room. Without having to move from one room to another and meeting different service providers, we were able to get different services such as family planning, STI treatment, free condoms, pap smears, HIV testing, prenatal care, counselling and ARV services among others; depending on one’s need. No one could even tell what service an individual had gone for. This kind of privacy and convenience is very important to us.

Due to the satisfactory services I got from the clinic, I quickly spread the word about LPPA to all my friends. I encouraged them to visit Thakaneng to experience superior quality of services; offered in an extremely professional manner. I was able to refer over 200 sex workers for services to the LPPA clinic.

Happy with LPPA’s services, I became an advocate for the organization, eventually becoming a volunteer peer educator. In this capacity, I continued my mobilization efforts targeting both women and men (including men who have sex with men) engaged in sex work in Maseru.

Today, my work as an LPPA volunteer peer educator sees me move from one sex hotspot to another sharing information about safe sex and distributing both male and female condoms –which are in abundant supply (and for free) from LPPA. These hotspots include bars, night clubs, lodgings, hotels and streets.

Challenges in Mobilizing other Sex Workers

Mobilizing my fellow sex workers for services has its own challenges though. There is a lot of misinformation among this population. For example, when I encourage them to go for HIV testing, they say they don’t need to do so because they ‘feel fine’.

Two years ago, I lost a close friend -a fellow sex worker to HIV/AIDS complications. Once, when we were discussing our HIV positive status, I referred her to the LPPA clinic with the suggestion of being put on Antiretroviral Therapy (ART) just like I was.

However, she refused, saying that she ‘felt fine’ and was not sick. Yet, from the knowledge I had gained as a peer educator, I knew that antiretroviral drugs help keep one’s viral load low, help keep their immune system strong and thus improve their quality of life. Afterall, I was a living testimony of this. I tried explaining this to her, but she said that I was just being paranoid for nothing.

Sadly, months later, when an opportunistic infection attacked her, it took her down so fast and killed her in just a few weeks. It always brings tears to my eyes whenever I think about my friend because I believe it was a death that could have been avoided –if only she had started taking her ARVs.

Being a Role Model

Being HIV positive I religiously take my ARVs -which I thankfully get for free at LPPA. I believe this is what has helped me remain healthy and strong. I became pregnant with my second child while I was involved with LPPA activities and through their Prevention of Mother-to-Child Transmission (PMTCT) program, I am happy to say that my two-year-old daughter is HIV negative.

I feel proud when my fellow sex workers tell me that I am their role model. They say that I am an example of how one can live a healthy and robust life even though they are HIV positive. They see my determination and zeal in all that I do; as a mother who provides sufficiently for her children, a colleague, a peer educator and community mobilizer, and they feel inspired.

The fact that sex work is illegal in my country is a great challenge for me and my friends. Many times, we are harassed by clients who abuse us verbally and physically. Clients intimidate us into having unprotected sex with them. Many of us have been raped -some multiple times. Sometimes they even refuse to pay for our services, knowing very well that we cannot report them to the police because our work is illegal. With many of us being single mothers, we dare not let this happen because when we get arrested and locked up, who will fend for our children?

I believe that if sex work were legalized, then these abusive incidents would reduce. If we have a legal system that can protect us, then we will be free to report our abusers and advocate for justice and more conducive working environments. In the meantime, we remain grateful to organizations such as LPPA that genuinely cater to our healthcare needs. I can testify that my life and those of other sex workers in Maseru are so much better because of LPPA's Thakaneng!”

Kekeletso Lisebo* (not her real name). Her name has been concealed to protect her identity. She narrated her story to Maryanne W. Waweru, the Governance and Compliance Officer, IPPF Africa Region.

For more information about the work of IPPF Africa Region, connect with us on Facebook and Twitter.