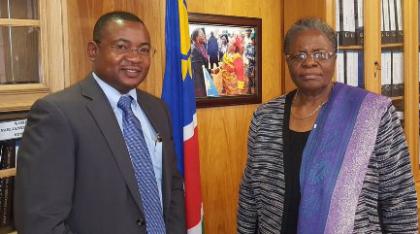 Domestication of SRHR Policies in Africa Must be Prioritized: IPPF’s Liaison Office to the African Union (AULO) meets Namibian Leadership

Mr. Sam Ntelamo, the Resident Representative of IPPF’s Liaison Office to the African Union was recently in Namibia where he participated in successful discussions with some of the country’s leaders. M...

Mr. Sam Ntelamo, the Resident Representative of IPPF’s Liaison Office to the African Union was recently in Namibia where he participated in successful discussions with some of the country’s leaders. Mr. Ntelamo met with the Deputy Prime Minister of Namibia HE Netumbo Nandi-Ndaitwah, where he shared IPPF’s work in the Africa region, and more so that of its’ Liaison Office to the AU.

IPPF’s Liaison Office to the African Union (AULO) provides opportunities for enhanced visibility of the organization and its contribution to Africa’s development. It also plays a networking role with various stakeholders in the Sexual Reproductive Health and Rights (SRHR) field, and also engages in related advocacy activities. In addition, the Liaison Office serves as a machinery that gathers intelligences on policy issues that touch on SRHR, monitoring and ultimately contributing towards policy development at the AU level.

In his discussions with HE Nandi-Ndaitwah, Mr. Ntelamo expressed gratitude towards the Namibian government’s support to the revised Maputo Plan of Action 2016 – 2030  (MPoA), in which IPPF played a key role in its review. The revised MPoA (adopted at the 27th African Union Summit in July2016 in Kigali) is Africa’s flagship policy framework for universal access to comprehensive sexual and reproductive health services. The Plan builds a momentum to the Sustainable Development Goals (SDG) -especially goals 3 and 5. Discussions between HE Nandi-Ndaitwah and Mr. Ntelamo prioritized the need for the domestication of regional and global SRHR policies, including MPoA, SDGs and other campaigns such as the ‘AU End Child Marriage’.

Mr. Ntelamo also had the opportunity to meet with Namibia’s Deputy Minister of Planning Hon. Lucia Lipumbu, where similar discussions regarding support for SRHR and implementation of related policies were held.

In a separate meeting with the country’s Director of Parliament Mr. Tijpa Tijera, Mr. Ntelamo solicited support for the Africa Parliamentarians project which the Liaison Office coordinates in Addis Ababa. The forum provided an opportunity for Mr. Ntelamo to share information about the upcoming Parliamentarians General Assembly holding slated to take place in Dakar, Senegal in November 2016.