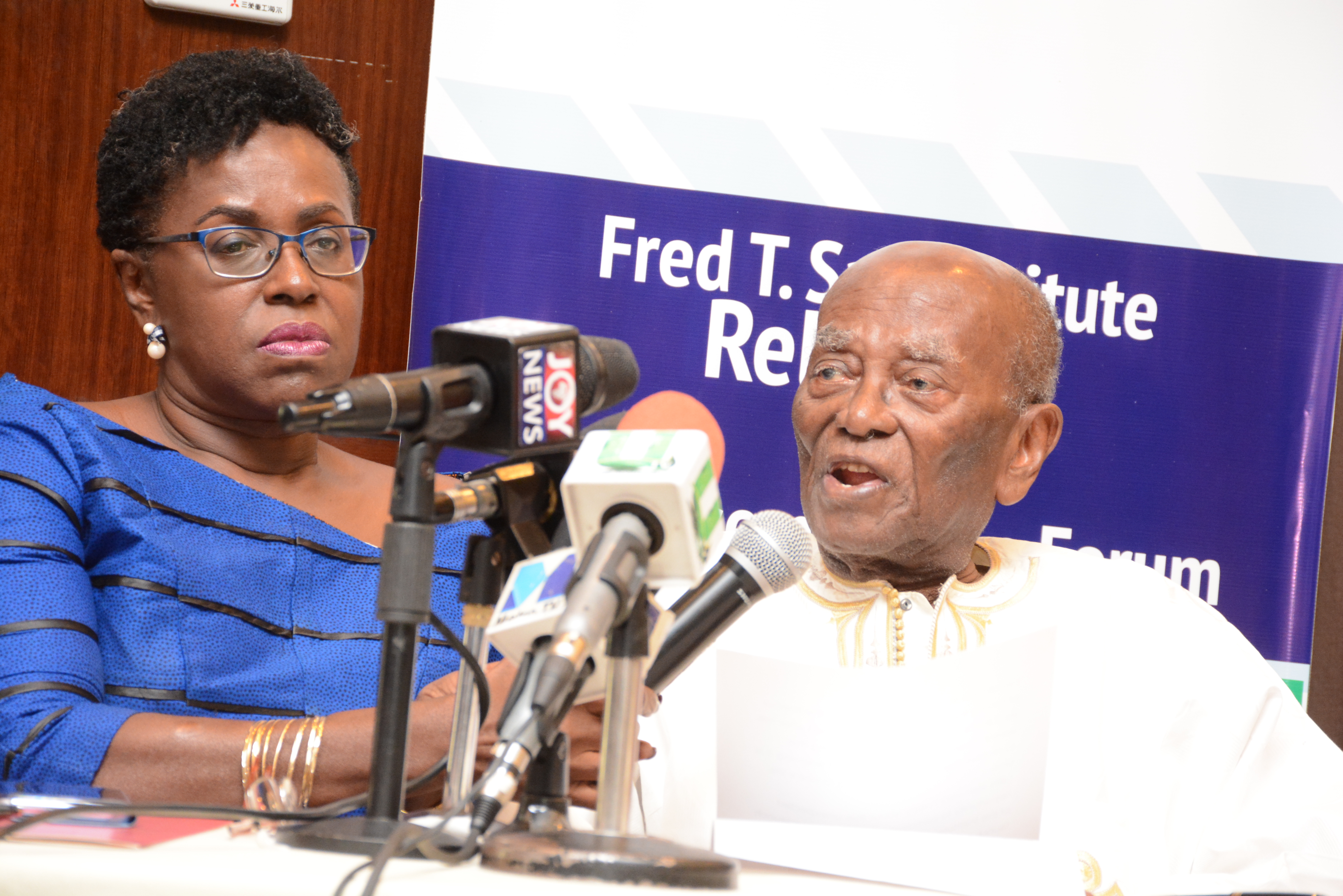 Prof. Frederick Torgbor Sai, born on 24th June 1924 is a family health physician who co-founded the Planned Parenthood Association of Ghana (PPAG) in 1967. As a gender and reproductive health advocate, he is known for his campaigns and education drawing attention to the food and nutrition problems of Africa, particularly of women and children.  He is a product of the Osu Presbyterian Senior Boys School (Salem), Achimota College and University of London and Harvard University. Married to Florence and together, they have raised 6 children. Prof. Sai loves to give lectures, plays golf, loves[JN1] jazz music, spending time with friends and family.

Prof. Sai served as the Director of Medical Services and Professor of Community Health at the University of Ghana, Legon. He was also a Nutrition Advisor to the Food and Agriculture Organisation, Africa Region as well as the coordinator for the World Hunger Programme of the United Nations University and a Senior Population Advisor to the World Bank. He was the President and Honorary Secretary of the Ghana Academy of Arts and Sciences. Prof. Sai became the first Head of the National Population Council, first African President of the International Planned Parenthood Federation (IPPF) and was instrumental in setting up the IPPF Africa Regional Office as well as the Centre for African Family Studies (CAFS) in Nairobi. He was named the Godfather of family planning in 2012 by the prestigious medical journal, The Lancet.

In his fifty-year career, Prof. Sai advocated for family planning policies in Ghana leading to the provision of subsidized family planning services to public hospitals by the government in 2007 under the Free Maternal Health Policy. Known in the global community as a champion of women’s sexual and reproductive health, he also an authority on health, nutrition and population.He believes that, any young girl or woman who wants an abortion should be allowed to have one in a safe medical environment.Prof. Sai held the Chairmanship for Main Committees of the last two major UN conferences on Population and Development: 1984 International Conference on Population in Mexico City and the 1994 International Conference on Population and Development (ICPD) in Cairo.

Prof. Sai is a recipient of several awards including theUnited Nations Population Award in 1993 for his work in Population, Reproductive Health and Nutrition, the 1995 Prince Mahidol Award in "recognition of his long-standing involvement and global leadership on international family planning and population issues”, Honorary Doctorates from Tufts Universityand University of Ghana, Honorary Fellowship of the American College of Obstetricians and Gynecologists and the Royal College of Obstetricians andthe Harvard School of Public HealthAlumni Award of Merit for his contributions to the field of public health. In 2006, Prof. Sai was awarded one of Ghana’s highest National Honours, Order of the Star of Ghana - Member of the Star of Ghana (MSG) Civil Division.

Prof. Sai has some publications to his credit and these include “Adam and Eve and the Serpent”,dealing with the inequalities and the difficulties faced by African women; and “Fred Sai Speaks Out” which is a collection of essays on his views of the reproductive health field which includes a letter to Pope John Paul II asking for a reconsideration of the Vatican’s anti-contraception and family planning stance. He published his memoirs, With Heart and Voice: Fred Sai Remembers in 2010.

FSI is an initiative of the IPPF Africa Region, established in Prof. Sai's honour as a "pioneer public health research institute, championing research on population and sexual reproductive health to generate evidence on effective health strategies aimed at improving the health of the population in sub-Saharan Africa". FSI seeks to bridge this gap through supporting research, modelling and replication of innovative service delivery programs.  The research conducted would generate evidence for sound program design and implementation in the 42 African countries that IPPF Africa Region works in. The Institute provides small grants for postgraduate research to young women and men and it organizes a biennial dissemination forum between academia, NGOs and government to disseminate the findings.

FSI was first launched in 2014 in Nairobi, Kenya. The Institute was re-launched in Accra on 30th July, 2018 by IPPF Africa Region and the Planned Parenthood Association of Ghana (PPAG) to enable Prof. Sai to be present and for stakeholders in Ghana to participate in the two-day dissemination forum. The forum saw the first set of five (5) postgraduate students who received funding support from FSI to conduct research in the SRHR, share their findings. It is expected that, these findings would influence policy and advocacy on the African continent and help improve lives of all Africans especially women and children, whom Prof. Sai campaigned for, over the 50 years of his life as an advocate, policy advisor and campaigner. Prof. Sai who was at the Re-launch, said the Institute will foster Africa’s empowerment to achieve the Sustainable Development Goals.

We honour and celebrate you Prof. Fred Sai, our SRHR Champion!

Archibald Adams is the Advocacy Coordinator of the Planned Parenthood Association of Ghana, the leading CSOs working in the area of Sexual Reproductive and Health Rights in Ghana. His email address is [email protected]