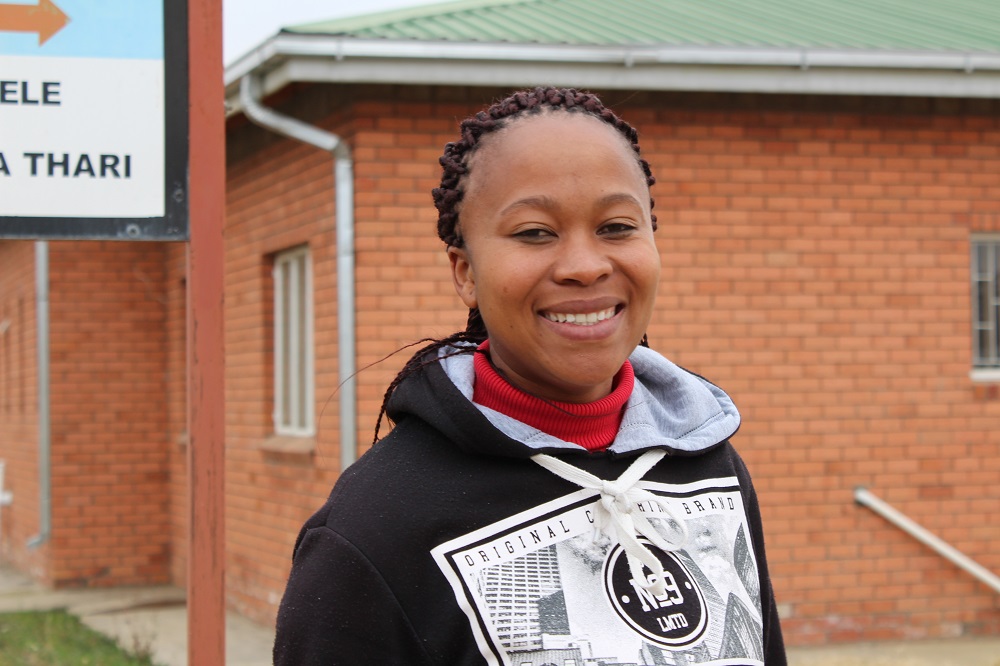 26-year-old Setsoto Ramatsabane is the immediate past President of the Youth Action Movement (YAM) Lesotho chapter. She joined YAM in 2014.

26-year-old Setsoto Ramatsabane is the immediate past President of the Youth Action Movement (YAM) Lesotho chapter. She joined YAM in 2014. In this article, she talks about her experiences with the youth volunteer programme at the Lesotho Planned Parenthood Association (LPPA), how these experiences have helped her grow and the doors that have opened up for her.

What motivated you to join the YAM?

After I had my son at the young age of 20 years, I knew that I had to plan my life well in order to achieve the goals that I had set for myself. With that resolve, I went to seek information on family planning from the Lesotho Planned Parenthood Association (LPPA) clinic in my home area of Mafeteng. I had heard that the clinic provided good family planning services.

While receiving services at the LPPA clinic, I also learned about the Youth Action Movement (YAM), where young volunteers regularly went to schools to educate students on topics such as puberty, adolescence, menstruation and making healthy choices about their bodies.

This interested me very much because, with my personal experience as a young mother, I felt inspired to talk to teenage girls. I wanted to give them advice about how they could avoid teen pregnancy and stay focused on their studies. When I was in school, no one had given me this kind of information.

Driven by this desire, I joined the Youth Action Movement and began going to schools to talk to adolescents about sexual and reproductive health. We tailored our information sessions to tackle issues such as menstrual hygiene, peer pressure, abstinence and safe sex. We also talked to them about how to be firm about their decisions. I also participated in out-of-school outreaches where we would talk to young adults about similar issues.

Through our work, we were able to reach thousands of young people with information about their reproductive health.

How Being a Youth Volunteer Helped me Grow

Being a volunteer with YAM helped me grow in many ways. For starters, I was a very shy girl before I joined the group. I couldn’t speak in front of people. But the more I participated in outreach activities where I was given the opportunity to talk to fellow youth, I began believing in my ability to speak before a crowd. Gradually, I became bolder and more confident. Today, I can address a multitude of people!

I have also refined my poetry skills through my engagement with YAM. While in school, I used to write poems but kept them to myself because I was afraid that they were not good enough. But as I interacted with my fellow youth volunteers, I started sharing my poems with them and I was surprised when they said they were good. Encouraged, I started writing more poems and performing them to my peers. My poems focused on issues such as relationships, HIV and AIDS, peer pressure etc.

With time, I started reciting the poems during outreaches and at LPPA functions. Then I started being called upon to perform at other public functions where there were government officials and other NGOs. Sometimes I'm amazed at how far I have come, from the shy girl afraid of crowds, to a great performer. All thanks to the confidence I gained through my engagement with YAM.

Tell Us About Your Leadership as the YAM President

I became interested in leadership because I wanted to be the female leader that younger girls could look up to. I wanted to set an example of myself, where girls would be encouraged to know that they too can rise to top leadership positions. I started off by vying for the Mafeteng YAM Chairperson position in 2015, where I was successful. The following year, I was elected the YAM President.

As the YAM national Chairperson, I served in the LPPA National Executive Committee (NEC) as the youth representative.

Being in this position helped me learn a lot, including how to prepare various reports (financial reports, program reports, annual reports etc). I also learnt about the importance of governance structures and effective management in an organization. Often, I would be called upon to represent LPPA in various forums with different stakeholders, especially on issues concerning youth.

Having experienced the benefits of being a volunteer, I purposed to get as many other young people on board. One of the successes credited to my leadership is the increased number of youth volunteers in LPPA.

What do you Hope to Be In The Future?

I hope to become a successful author. In addition to my poems, I have written two books; one in English titled ‘The Show Goes On’. This is the story of a young woman who became pregnant and consequently underwent various challenges but with a strong will, she managed to overcome them. It is basically my story.

The second book is written in the local Sesotho language. It is titled Kili ea malla paka mahlomola. The book is a collection of short stories about issues that affect adolescents face as they grow up.

None of the books have been published yet, but I’m hoping this will happen soon.

Tell us About your Current Job

I am a youth ambassador working on an advocacy project for the rights of Young Persons Living with HIV/AIDS (YPLWHA) with an NGO in Mafeteng. I believe I got the job because I had the necessary knowledge, skills and experiences that were required for the role. All these I had acquired while volunteering with LPPA in the youth program. In addition, my role in the LPPA board where I honed my leadership skills was an added advantage.

My encouragement therefore to young people, is that they should look for volunteer opportunities in organizations that align well with their goals. It is these opportunities that will help them create change in their communities and will also help them grow as individuals. I’m certainly not the same person I was when I joined LPPA six years ago. I have grown tremendously!

If you are young person and would like to join the Youth Action Movement, see where we work and get in touch. You can also reach us through @YAM Africa

For more information about the work of IPPF Africa Region, connect with us on Facebook and Twitter.