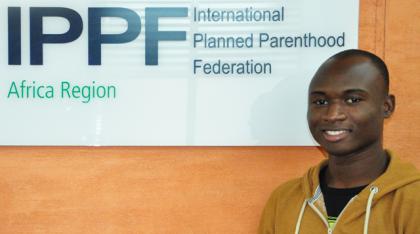 23 year-old Nhanna Apami Intchami is a Youth Action Movement (YAM) member from the West-African country of Guinea Bissau. Tell us a little more about Nhanna, and your engagement in YAM –Guinea Bissau

Tell us a little more about Nhanna, and your engagement in YAM –Guinea Bissau

I come from a polygamous family. We are 15 brothers and sisters. Sadly, three of my siblings passed away before their first birthday.

While in secondary school, I joined IPPPF Africa Region’s Member Association -the Associação da Guiné-Bissau para a Educação e Promoção da Saúde Familiar (AGUIBEF) as a peer educator. I also became interested in the activities of the Youth Action Movement (YAM), and became a member.

I completed my secondary school education in 2014, and thereafter joined Jean Piaget University to study Economics. However, I was unable to continue with my studies due to financial constraints. My family was not able to afford the fee.

My participation in YAM has seen me hold the positions of YAM Regional Advisor and YAM Executive secretary. Today, I am in charge of resource mobilization. As part of AGUIBEF, I am also President of the National Advisory Council for Children and Youth of Guinea-Bissau. I am also the Sub-Director of pedagogic sector at Escola de Cadetes educational project (coaching of adolescent’s project) and member of the National Confederation of Student Associations of Guinea-Bissau.

I also work as a volunteer at “Radio Bombolom FM” as a reporter and presenter. In addition, I am an animator of a children´s program called “Nó Pensa Nó Futuro”* at the same Radio.

Where does your passion for youth and SRHR come from?

In 2010, Guinea Bissau undertook a Multiple Indicator Cluster Survey. The results revealed high rates of maternal mortality, infant mortality, early pregnancy, child marriage, Female Genital Mutilation and HIV prevalence in some regions. This information caught my attention as I remembered my three siblings who has passed away before they got to celebrate their first birthdays. They had died due to some indicators mentioned in the survey. It is then that I decided to join an organization involved in issues of reproductive health to broaden my understanding on some of the indicators mentioned in the survey. That was when I joined AGUIBEF.

What SRH projects or programmes have you been involved in?

As a YAM member, I implemented a 6 month advocacy project on Comprehensive Sexuality Education (CSE) for community leaders in Bissau. The project was for AGUIBEF funded by OOAS – West African Heath organization.

As Chair of  National Advisory Council for Children and Youth of Guinea-Bissau, with Plan International funding I promoted a workshop in Advocacy for SRHR for girls and boys and managed to have participation of the President of Republic of Guinea Bissau as well as government represented by Ministry of Interior.

I have also been involved in the Escola de Cadetes educational project – which is a coaching project for knowledge, skills, values and attitudes. The contents of the coaching program were designed by Youth National Council and is expected to be used for each group in a period of six to nine months. To date, I have coached about 40 young people.

Where do you see yourself five years from now?

I hope to have completed my degree in Economics, and be fluent in English and French languages.