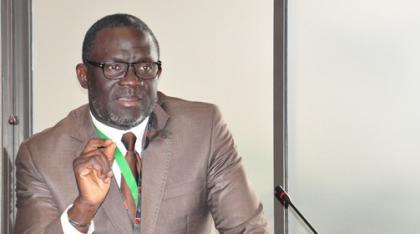 Parliamentarians are Key to Realizing Demographic Dividend in Africa

African parliamentarians must seek ways of mobilizing resources to fund the demographic dividend agenda in their countries. This is according to the IPPF Africa Region Director Mr. Lucien Kouakou, who...

African parliamentarians must seek ways of mobilizing resources to fund the demographic dividend agenda in their countries. This is according to the IPPF Africa Region Director Mr. Lucien Kouakou, who made these remarks during the closing ceremony of a two-day capacity building workshop for African Parliamentarians held in Nairobi, Kenya, from 14 – 15 December 2015.

The meeting, attended by 13 legislators drawn from the Africa Parliamentary Forum on Population and Development (FPA), was aimed at enhancing the legislators' understanding of the concept of the ‘Demographic Dividend’, and their role in moving forward related agenda. The demographic dividend refers to the accelerated economic growth initiated by a rapid decline in fertility and mortality, and which results in a change of the age structure in the population –from one dominated by child dependents to one driven by an economically productive adult workforce.

“Harnessing the demographic dividend is fundamental to Africa’s development. A demographic shift in any population is important because of it's direct bearing to among others: economic growth, education levels, poverty levels and the health and well-being of a nation. The current demographic transition in Africa is one that has the ability to steer the next surge of economic growth - with a population characterized by healthier and more educated youth, and who will have greater access to the labour force and economic markets. African leaders therefore need to put in place measures that will ensure that the continent harnesses the dividend from Africa’s youthful population,” he said.

A new report from the World Bank reveals that government policies and other related actions undertaken today will increase the likelihood of harnessing various economic and social benefits of demographic change.

“Parliamentarians are instrumental in this process, as they are the ones involved in the formulation of policies and legislations. When a country has the right set of policies in place, it is better placed to reap the benefits of a demographic change, hence the need to involve Members of Parliament in all conversations around the demographic dividend. There is no doubt that the demographic dividend can be achieved in Africa, if the right policies are instituted,” said Mr. Kouakou.

The capacity building initiative for the African legislators, organized by IPPF and UNFPA and themed: "Moving the Demographic Dividend Agenda: from Ideas to Actions", established a harmonized understanding of the demographic dividend among the MPs, and helped define their level of engagement in advancing this agenda in their countries. A clear roadmap for moving forward the demographic dividend agenda at both regional and national levels was developed during the forum.

In his speech, Mr. Kouakou called on the MPs to take a lead role in mobilizing resources that will ensure that the demographic dividend will be realized in their countries.

“Parliamentarians can influence their colleagues and garner their support for the formulation of policies and legislations, specifically those related to population and development. They can call for more budgetary allocation to respective institutions, such as the Ministries of Planning and Development, The Ministries of Health and Education, as well as institutions that focus on the youth. They can also take the lead in seeking innovative ways of mobilizing resources at the local level that would champion population and related issues. Members of Parliament have an unmatched role in steering development in their countries,” he said.

Mr. Kouakou further urged the legislators to take advantage of the resource that is partners who have a presence in the region, such as IPPF and UNFPA – entities that are committed to Africa’s growth. Development partners, if convinced that the demographic dividend is key to the growth of the region, will definitely assist in different ways, including offering technical assistance, capacity building and mobilization of resources, he said.

“IPPF and UNFPA are committed to this agenda, and are working in collaboration with the Africa Parliamentary Forum on Population and Development (FPA) to implement a programme that will ensure that all African countries are on track to realizing the demographic dividend. The project is initially slated for implementation in the six countries of Mauritania, Ivory Coast, Mali, Burkina Faso, Niger and Chad, with more countries being incorporated in the coming years. We are keen on ensuring that no country is left behind,” he said.

The Africa Parliamentary Forum on Population and Development (FPA), which was established in 2012, seeks to exchange and coordinate action in support of the ICPD Beyond 2014. FPA also seeks to ensure that parliamentarians assist in the implementation of the ICPD Beyond 2014 Agenda by adopting initiatives in population policies, as well as harmonisation of African legislation on Sexual and Reproductive Health and Rights (SRHR). At the Abidjan General Assembly meeting in 2014, FPA reaffirmed its purpose as a regional body established to drive the agenda on population and development at both the national and regional levels.