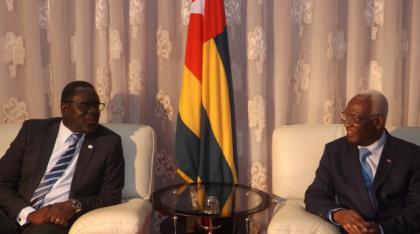 The IPPFAR delegation currently on an advocacy and resource mobilization mission in Lome, Togo, has today met with The President of the National Assembly of Togo Mr. Drama Dramani. In his remarks, Mr....

The IPPFAR delegation currently on an advocacy and resource mobilization mission in Lome, Togo, has today met with The President of the National Assembly of Togo Mr. Drama Dramani. In his remarks, Mr. Dramani  congratulated the team, led by Mr. Lucien Kouakou –the IPPF Africa Region Director for the key role that IPPFAR, through its Member Association in Togo -The Association Togolaise pour le Bien-Etre Familial (ATBEF) continues to play in the country in its provision of quality reproductive health services. Also present in these discussions was the UNFPA Resident Representative in Togo.

Mr. Dramani assured the IPPFAR delegation of the unwavering support of his institution, including the facilitation of a workshop for Members of Parliament (MPs) on issues surrounding Comprehensive Sexuality Education and the Demographic Dividend. He also pledged that the National Assembly will consider ATBEF’s request for funding and committed his assistance to mobilizing resources locally in favor of the IPPF Member Association in Togo.

The delegation also held discussions with the President of the Association of Large Enterprises of Togo (AGET), José M Symenouh. In response to Mr. Kouakou who presented the Strategic Plan of the Federation, together with the touching testimonies of representatives of ATBEF’s Youth Action Movement (YAM), AGET pledged its commitment to the advancement of the youth agenda championed by ATBEF. The President further committed to being an ATBEF champion among his peers, which will include the promotion of the organization and mobilization of resources. He extended an invitation to ATBEF during the next meeting of members of AGET, and further invited the organization to make submissions on projects of interest to AGET members.

The Chairman of the Trustees, Mr. Kossivi Naku urged ATBEF to continue strengthening its provision of reproductive health services, more so with a focus on young people. He pledged to facilitate the signing of a partnership agreement between employers and ATBEF before the end of November 2016, and to facilitate the inclusion of ATBEF as part of a delegation that will travel all private sector businesses to raise awareness on the noble causes of the organization.

Later in the day, the IPPFAR delegation met with officials from the Ministry of Planning, and their counterparts from the Ministries of Infrastructure and Transport, Foreign Affairs and Cooperation, who pledged to support the work of ATBEF.