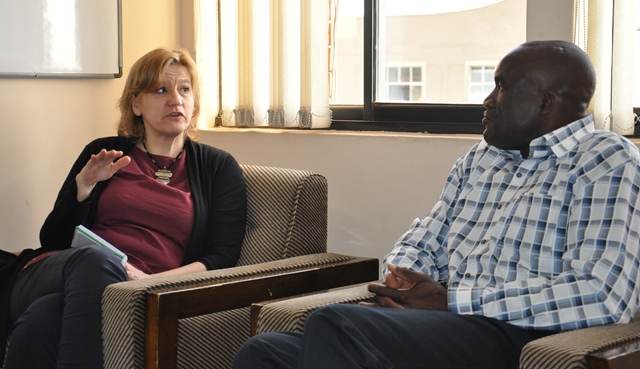 During the meeting, Mr. Marienga oriented Ms. Hickson on FHOK’s work in the country, whose core focus is the provision of quality sexual reproductive health and services to millions of men, women and young people.

FHOK, a local Non-Governmental Organization has been a leading service provider of sexual and reproductive health services in the country for over five decades. With a strong grassroots network, FHOK is present in 14 Counties (out of 47), through its Family Care Medical Centers. Through innovative delivery programming and capacity building, FHOK particularly focuses on young people, marginalized groups, underserved and inaccessible populations in the country. FHOK has a pricing policy that offers affordable, quality and easily accessible services to all.

The meeting between Ms. Hickson and Mr. Marienga also acted as an experience-sharing forum between the two parties, where both discussed best SRHR implementation practices. FHOK also showcased its successful business models including its Learning Center and other income-generation ventures, which have greatly contributed to the success and sustainability of the organization over the years.

“Our work has also been greatly enhanced by the strong partnerships that we have formed with different stakeholders, chief among them the Government of Kenya. We recognize the invaluable support of the Government in the achievement of our goals, and regularly consult with them on various issues. We also collaborate with them in programme activities, such as cervical cancer screening, testing and treatment, as well as various HIV/AIDS activities –including at the grassroots level. FHOK works with other non-governmental organizations, community-based organizations, faith-based organizations, youth networks and other groups towards the realization of it's goals,” Mr. Marienga added.

Other issues that were discussed included effective advocacy strategies in the push for supportive SRHR policies and legislations at local, national and regional levels.

Ms. Hickson commended FHOK for its work, saying that there was plenty to learn from the organization, and which can also be emulated by other Member Associations –including those in Europe. IPPF EN includes 39 Member Associations and collaborating partners in as many countries throughout Europe and Central Asia. The Region reaches from Iceland to Kyrgyzstan and from Russia to Israel, from some of the richest countries in the world to some of the poorest, from donor countries to recipient countries, from long-standing democracies to countries still struggling to find their way.