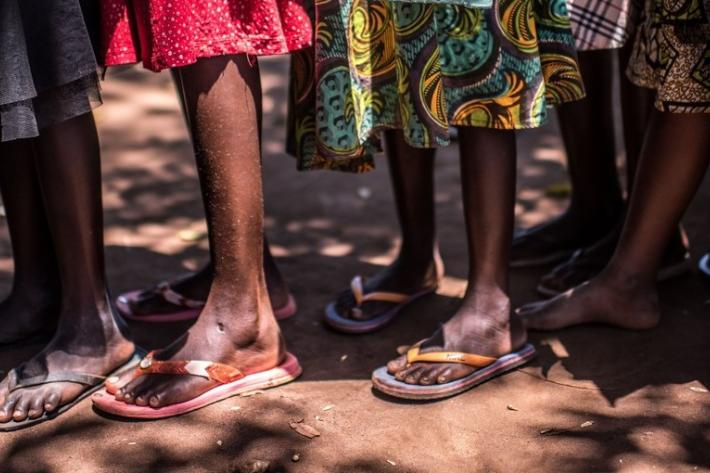 Guinea: Horrific cases of rape and murder of girls must urge authorities to strengthen their efforts to prevent and combat sexual violence Primary tabs

Guinean authorities must take immediate measures to ensure thorough and impartial investigation of recent rapes and sexual assaults followed by murders committed over the course of just eight days and...

They must also increase their efforts to fight sexual violence by strengthening prevention, supporting access to justice for survivors and adopting a special law on violence against women. Six girls aged between three and 16, and a woman were sexually assaulted, and some were raped between 25 November and 2 December 2021. Two of the girls have died as a result of the violence.

“Rape is all too commonplace in Guinea. Authorities should urgently strengthen their efforts to prevent and combat sexual violence in Guinea," said Samira Daoud, Amnesty International West and Central Africa director.

On 2 December 2021, the Office for the Protection of Gender, Childhood and Morals (OPROGEM) presented a 24-year-old man charged with the rape of a three-year-old girl in the district of Gbessia in the capital Conakry.

This came just a day after the death of another 12-year-old girl in the north-eastern town of Siguiri. In the urban commune of Labé, west-central region of Guinea, a three-year-old girl was gang raped on 26 November.

Local organization, "Agir pour le Droit Féminin", which met with the three-year-old girl's parents on 7 December, told the organizations that she was abducted when going to buy candy not far from the family home. She was then taken to an uninhabited house and sexually assaulted until she died.

The girl’s father who met with the prosecutor confirmed his demand for justice for his daughter. One of the alleged perpetrator’s father requested forgiveness from the girl’s family but they refused.

The rapes of girls followed the rape of a woman on 25 November while she was in a hospital in the north-western town of Kamsar for a surgery. The hospital management announced three days later they had "arrested the alleged perpetrator" -who is an external service provider- and taken him to the gendarmerie.

The same day, a 16-year-old girl was also raped by several men in Kankan.

“The authorities must ensure thorough and impartial investigations of these rape cases without delay and anyone found guilty must be brought to justice," said Marie-Evelyne Petrus-Barry, IPPF Africa Regional Director.

“Survivors must receive access to medical care and psychosocial support as well as legal aid to access justice and redress.”

Since the beginning of the year, OPROGEM and the Special Brigade for the Protection of Vulnerable Persons (BSPPV in French) have already dealt with 331 rape cases. In 2020 alone, they dealt with 374 cases, a number which reflects only the tip of the iceberg according to NGOs working on sexual violence survivors, journalists, police and gendarmerie.

This is due to the stigma associated with rape in Guinea, which often leads to not reporting the crime and not filing complaints, and often such cases are handled through mediation and out-of-court settlements between the victims or their families and the alleged perpetrators or their families.

The recent rape cases follow another case that sparked a strong public reaction across the country last month.

M’Mah Sylla, a 25-year-old woman, was allegedly raped by doctors at a non-licensed clinic in Conakry, where she went for treatment. She got pregnant as a result, and the same perpetrators raped her again when she returned to the clinic to seek an abortion. The rape caused injuries that could not be healed despite seven surgeries. The victim died on 20 November in Tunis (Tunisia) where she was medically evacuated following a government intervention.

Following M’Mah Sylla’s death, women staged protests on 22, 24 and 30 November in the towns of Labé, Kindia and N’Zérékoré, demanding justice for all victims of rape.

On 21 November, the Ministry of Justice said three of the four alleged perpetrators of M’Mah Sylla’s rape had been detained in Conakry prison. The government also presented its condolences to her family on behalf of the head of state.

Activists spoke out on the surge in rape cases.

“Even dead, M'Mah Sylla deserves justice. I am convinced that the day the perpetrators will be sentenced to the punishment they deserve, her soul will finally rest in peace. We have had too many cases like M'Mah Sylla’s and we hope and dream of not having any more.”

“Authorities have taken some steps in the right direction in recent years which we welcome, such as the creation in 2020 of a special unit within the gendarmerie to fight sexual violence. In addition, local women’s rights organizations have played and continue to play a major role in speaking up against sexual violence, together with some media,” said Samira Daoud

"Despite this situation, the persistence of rape cases, especially of girls, calls for much greater efforts to raise awareness among the public to prevent sexual violence, to protect the survivors, and ensure their timely access to justice and reparations as well as to bring perpetrators to account. This includes but is not limited to the adoption of a special law on violence against women, as recommended by the CEDAW Committee,” concluded Marie-Evelyne Petrus-Barry.

Read this article in French here.