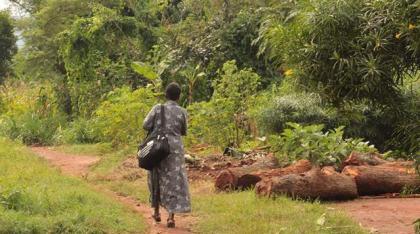 "The Radio Announcement that Changed My Life" -Gertrude Mugala (Uganda)

Gertrude Mugala is a teacher in Fort Portal town, western Uganda. While Gertrude considered herself fairly knowledgable about cancer, she had never thought of taking a screening test or imagined herse...

Gertrude Mugala is a teacher in Fort Portal town, western Uganda. While Gertrude considered herself fairly knowledgable about cancer, she had never thought of taking a screening test or imagined herself ever having the disease. That was until she one day chanced on a radio announcement urging women to go for cervical cancer screening at a Reproductive Health Uganda (RHU) clinic.

“The radio presenter was talking about cervical cancer and in her message, she encouraged all women to get screened. I decided to go and try it out,” she says.

But Gertrude's results were not as she expected. The news was not good. Gertrude was found to have pre-cancerous cells in her cervix. The good news however was that it was at the pre-cancerous cell stage, and with the right intervention, it did not have to develop into cancer. Cervcial cancer is treatable if detected early and appropriate medical interventions undertaken.

“I was so shaken when I was told I had pre-cancerous cells. I did not know what was happening and I didn’t believe what I was hearing. I had no idea that along, while I thought I was healthy, I was actually harbouring a potential killer disease in me. What would have happened if I didn’t go for the screening? If I hadn't heard the radio announcement?”

Gertrude was then referred for cryotherapy, which is a treatment for precancerous lesions. This method involves freezing abnormal tissues with a probe - cooled by liquid nitrous oxide or carbondioxide. It has an overall effectiveness rate of 80-90 percent in women with suitable lesions. Cryotherapy is inexpensive, does not require electricity, and is practical for low-resource settings. It has been safely performed by nurses and other non-physicians in low level facilities and at the primary care level.

“Following cryotherapy, I am now in the process of healing, and I am supposed to go back for review after three months,” Gertrude says.

Today, Gertrude advocates cervical cancer screening in her community. She talks to women about cancer, especially cancer of the cervix at her workplace, at the market, in meetings and any other opportunity she gets.

“I decided to let women know that cervical cancer is real and it is here with us, and that it kills. At the moment those are the platforms I have and I will continue educating women about cancer and encourage them to go for routine testing. I am also happy that I was near my radio that day, where I heard that announcment encouraging all women to get tested for cervical cancer. It might be because of that radio announcement that I am here today,” she says.

Cervical cancer is one of the two most common causes of cancer-related deaths in Uganda. According to Uganda’s health ministry, more than 3,500 women are diagnosed each year with cancer, with more than 2,400 dying from a disease that is preventable and curable when detected early. RHU has accelerated access to services such as cervical cancer screens in response to this growing need.