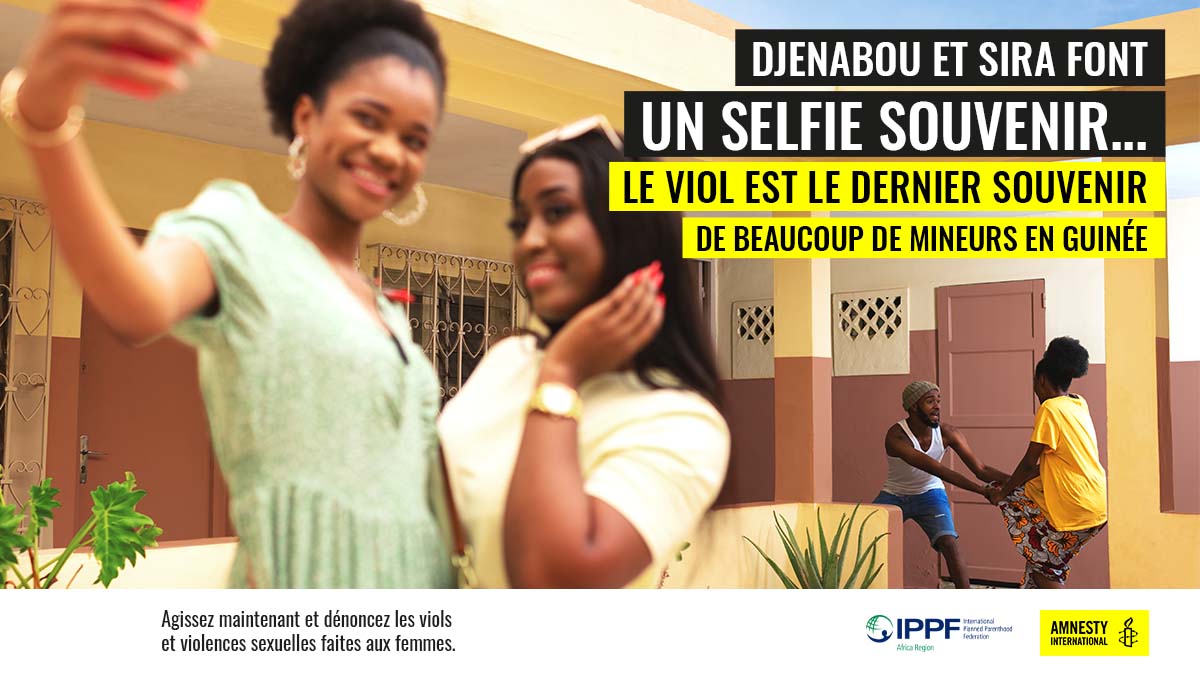 Based on interviews with survivors of rape, administrative, judicial, traditional, and religious authorities, health care professionals, diplomats, civil society representatives, the report analyses the numerous obstacles to effective care for victims of rape, forensic examination, psychological support, and access to justice in Guinea. For many survivors, justice remains unattainable.

"Victims and their families have repeatedly told us that the horrendous sexual violence they experienced is compounded by societal judgement, but silence is starting to break on rape cases and civil society is moving to denounce sexual violence,” said Samira Daoud, Amnesty International's Regional Director for West and Central Africa.

“Despite recent efforts by the authorities to tackle the issue of sexual violence, many remains to be done in terms of information, prevention, access to care and justice to respect Guinea's obligations under international and regional human rights laws.”

In 2021, the Office for the Protection of Gender, Children and Morals (Oprogem) and the Special Brigade for the Protection of Vulnerable Persons (BSPPV) - specialized units within the police and the gendarmerie- dealt with more than 400 cases of rape, and most of the victims were minors, some of whom are under 13.  This report shows that the real figures of rape cases are undoubtedly higher, considering notably the practice of extrajudicial settlement and the higher number of cases treated in medical centres.

Victims of sexual violence and their families often face intense judgement in their communities amid widespread social stigmatization.

The mother of a girl who said she was raped told Amnesty International about the stigma her child experienced:

“[…] When we went to the hospital, one of the doctors said: ‘This is the little girl who was raped’. It hurts. Everywhere she goes, people point at her. She is always locked up in the house. She doesn't go out; she hardly communicates with people. She wants to go back to school but it's not possible."

More efforts should be done by the authorities to develop awareness and education campaigns to address the underlying social and cultural attitudes that discriminate against women and facilitate and perpetuate violence against them. These campaigns should promote zero tolerance for violence against women, debunk harmful gender stereotypes and myths associated with rape, eliminate the stigma associated with women victims of violence, and encourage victims to seek redress.

Guinea lacks an effective toll-free number enabling victims to report sexual violence and to receive medical and legal advice. And despite some initiatives like the creation of one-stop centres offering care and legal support, the availability, quality, and accessibility of the health system must be strengthened for victims, often of modest economic status. Many survivors are unable to access effective medical and psychological care or realise their right to sexual and reproductive health. Most medical specialist practice in the capital city Conakry and the cost of care can sometimes prevent victims from seeking treatment.

“The social stigma associated with rape in Guinea, which often leads to not reporting the crime and not filing complaints, leaves survivors of these atrocities without access to medical care and psychosocial support as well as legal aid to access justice and redress”, said Marie-Evelyne Petrus-Barry, IPPFAR Regional Director.

“Gender based violence in all its forms is recognised as a human rights violation by the international human rights framework and jurisprudence. Gender inequality, power imbalance and lack of respect for human rights are often the root causes of such heinous acts and prevents survivors from accessing and enjoying their full sexual and reproductive health and rights. As human rights defenders, we must all take a stand and put a stop to these inexcusable acts”, added Petrus-Barry.

Accessing justice is an obstacle course for victims

Despite achieving real progress by adjusting legal frameworks in recent years and developing specialized police and gendarmerie units to respond to sexual violence cases, gaining access to justice in Guinea remains a challenging obstacle course for victims of sexual violence, while perpetrators often enjoy impunity. Customary authorities have been able to push for out of court settlements leading to prosecutions being dropped, which is against the law and against the rights of the survivors.

Although there is lack of forensic specialists and the presentation of a medico-legal certificate is not a legal condition for filing a complaint, in practice it is often required. And even when this document is not required by the police or the gendarmerie, its absence becomes a major obstacle to a possible conviction in court.

Judicial investigations are often hampered by a lack of resources and training in addressing and investigating sexual violence, which negatively impacts victims’ quest for justice. In the absence of effective free legal assistance for those unable to afford a lawyer, only NGOs are able to provide legal support.

Similarly, Guinea’s justice system also lacks resources. The majority of judges, most of whom are men, work in poor conditions. The report of rapes survivors highlights that some of them perpetuate patriarchal stereotypes while handling sexual violence cases.

Furthermore, the fact that the survivors of the 28 September 2009 massacre had to wait 13 years to finally hope for justice and reparation was a powerful symbol of impunity; while the defence and security forces killed more than 150 demonstrators and committed sexual crimes against more than 100 women in a stadium in Conakry that day.

To strengthen their response to sexual violence, the Guinean authorities must urgently pass a comprehensive law on gender-based violence, among other recommendations highlighted in the report to strengthen the capacity of the judiciary, police and other law enforcement authorities, and social and health workers, to ensure full implementation of legal provisions aimed at addressing violence against women.

“Guinean authorities promised that they would fight gender-based violence and rape.  We urge them to take concrete steps to strengthen state efforts to prevent sexual violence, and guarantee care and justice for survivors,” said Samira Daoud.

For further information or to request an interview, please contact:

The International Planned Parenthood Federation Africa Region (IPPFAR) is one of the leading sexual and reproductive health (SRH) service delivery organization in Africa, and a leading sexual and reproductive health and rights (SRHR) advocacy voice in the region. Headquartered in Nairobi, Kenya, the overarching goal of IPPFAR is to increase access to SRHR services to the most vulnerable youth, men and women in sub-Saharan Africa.

Supported by thousands of volunteers, IPPFAR tackles the continent’s growing SRHR challenges through a network of Member Associations (MAs) in 40 countries. We do this by developing our MAs into efficient entities with the capacity to deliver and sustain high quality, youth focused and gender sensitive services. We work with Governments, the African Union, Regional Economic Commissions, the Pan-African Parliament, United Nations bodies among others to expand political and financial commitments to sexual and reproductive health and rights in Africa.